All six teenage girls who died instantly when semitrailer slammed into their sedan as they made left turn on highway. Blake Shelton – from same Oklahoma town – pays tribute
A 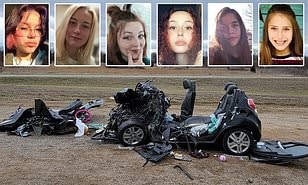 All six girls who were tragically killed when a truck collided with their car at an Oklahoma intersection known as ‘dangerous’ by locals have been named by friends and family, Your Content has learned.

Valendon Burton, 51, was identified as the driver of the semi-truck that collided with their car.

The collision on Tuesday killed all six girls as their vehicle was attempting to turn onto U.S. 377.

The driver was 16 years old, three of the other girls were 15 and the other two passengers were both 17.

Their 2015 Chevy Spark and the semi-truck collided around 12.19pm Tuesday near Tishomingo.

The Chevy Spark’s driver and the front-seat passenger were the only ones in the car wearing seatbelts.

‘Our hearts are broken and we are grieving with our students and staff,’ said Superintendent Bobby Waitman.

The school is offering counseling to any students affected by the tragedy as devastated classmates grieve,‘according to ABC8.