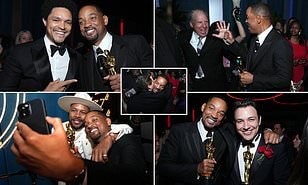 The Academy has held emergency talks over Zoom about stripping Will Smith of his Best Actor gong for smacking Chris Rock across the face for cracking a joke about his wife Jada Pinkett-Smith, it was revealed on Monday, as Hollywood’s hypocritical woke elite still scrambled to party with him through the night, Your Content has learned.

Will Smith supported by his wife and children at the Vanity Fair bash where he rapped and danced with friends.

Star, 53, won his first Academy Award ever after a stunning on-stage meltdown where he hit the host.

Her actor husband initially appeared to laugh but then ran on to stage seconds later and slapped Mr Rock.

Oscars’ stunned host was seen rubbing his face and said: ‘Wow, Will Smith just smacked the s**t out of me’

The audience and viewers initially believed it was all part of the joke until the actor’s meltdown continued.

He returned to his seat and began yelling repeatedly at Rock: ‘Keep my wife’s name out of your f***ing mouth’

40 minutes later he was handed Best Actor gong and sobbed as he apologised to Academy but not to Rock.

He revealed Denzel Washington said after slap: ‘At your highest moment that’s when the devil comes for you’

Fresh Prince of Bel-Air star even tried to defend his assault as he said: ‘Love makes you do crazy things,‘according to The SUN.