Biden will ask Congress for $32 billion to FUND the police to combat surging crime in his $5.8 TRILLION 2023 budget including a billionaire’s tax and a raise from 21% to 28% in the corporate tax rate
B 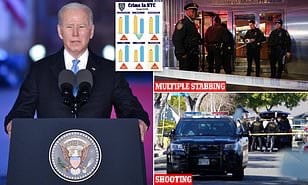 Joe Biden’s 2023 budget proposal includes $32 billion to fight rising crime in the U.S., according to two White House officials, despite years-long calls from the progressive wing of his party to defund police, Your Content has learned.

It will include $32 billion in funding for law enforcement and crime prevention.

Comes despite years-long calls from progressives to defund the police.

Biden has distanced himself from this rhetoric going into the 2022 midterms.

‘We should all agree the answer is not to defund the police, it’s to fund the police,’ the president said during his State of the Union address this month.

Crime has been on the rise, especially in cities, over the last two years and Americans have expressed they don’t feel safe in their communities.

The FY2023 budget proposal will also include a 20% minimum tax on households worth more than $100 million,‘according to CNBC.