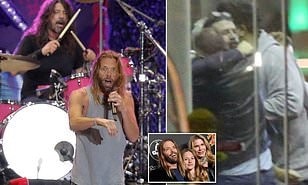 The body of Foo Fighters drummer Taylor Hawkins will fly to the US after being released by Colombian authorities, Your Content has learned.

The body of Hawkins, who died at 50, will now return to the US for burial.

He had ten substances in his system, including opioids and marijuana.

Plus white powder ‘similar to cocaine’ and hallucinogens spotted in hotel room.

Hawkins suffered ‘cardiovascular collapse’ after binging on a cocktail of drugs.

Foos completed tour dates in South America and were due to play at Grammys.

The band said it’s ‘devastated by the untimely loss’ and asked for family’s privacy,‘according to BBC News.