‘The Devil comes for you at your highest moment’: What Denzel Washington told Will Smith as he and Bradley Cooper tried to calm him down during Oscars commercial break after actor hit Chris Rock
& 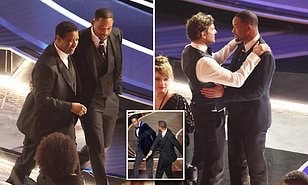 Two-time Academy Award-winning actor Denzel Washington could be seen consoling Will Smith after he smacked presenter Chris Rock in the face in a shocking moment during the Oscars live broadcast on Sunday night, Your Content has learned.

Moments after hitting Chris Rock in the face Will Smith could be seen being consoled at the side of the Dolby Theatre.

Actors Denzel Washington and Tyler Perry had a tête-à-tête with Smith.

Washington could then be seen smiling as he walked Smith back to his seat.

As Smith walked to return back to his seat in the front row, Bradley Cooper took time to further console Smith who appeared deeply upset ,‘according to MIRROR.