Walmart is ending cigarette sales in some California, Florida, Arkansas and New Mexico stores after years of debate within the company’s leadership ranks – which will free up the store to install more self-checkouts
W 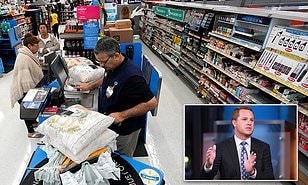 Walmart will quit selling cigarettes in some of its stores after a years-long debate within the retail giant’s management team about selling tobacco products, it was revealed on Monday, Your Content has learned.

Walmart is removing cigarettes from stores in California, Florida, Arkansas and New Mexico.

Walmart, which has more than 4,700 locations nationwide, is replacing cigarette displays with self-checkout registers and grab-and-go food.

Move comes after years-long debate between CEO David McMillon and other top executives.

In 2019, Walmart pulled the plug on sales of e-cigarettes because of growing regulatory complexity.