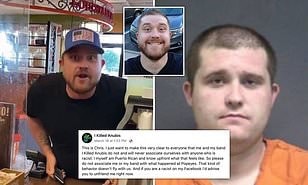 A white Florida man caught on camera threatening to lynch a black Popeyes worker while calling her the n-word has been exposed as a domestic abuse suspect, Your Content has learned.

Colton Norsworthy, 32, has been identified by multiple social media users online as the Florida man at the center of the racist rant.

A viral video captured the moment a white man went on the rant against black employees at a Popeyes in Okeechobee, Florida.

The man claimed the black employee called him a ‘cracker,’ but when the manager asked what he said to her, the man admits he called her the N-word.

He goes on a racist tirade as the employee fires back at him.

The man then threatens to beat the woman and hang her from a tree.

As he leaves the store, he yells that he’s white and ‘automatically’ better than her.

Popeyes officials said they’re providing support for the franchise and reviewing how to help employees deal with negative customers.

A search of Norsworthy’s criminal record revealed that he previously faced a slew of charges, including felony domestic battery by strangulation, obstructing justice, and tampering in felony third degree proceeding,‘according to The Daily Advent.