Florida Gov. Ron DeSantis accuses Disney of double standards for sailing cruises to Dominican Republic where gay marriage is illegal while slamming his ‘Don’t Say Gay’ bill and insisting on half of all new Disney characters be LGBTQ
F 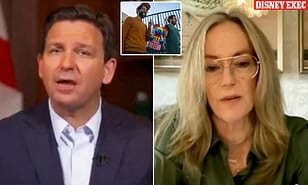 Florida Gov. Ron DeSantis on Tuesday slammed a Disney executive for her opposition to his Parental Rights in Education law while docking their ships in the Dominican Republic a country that bans same-sex marriage and condones discrimination against gay people, Your Content has learned.

Florida Gov. Ron DeSantis on Tuesday slammed a Disney executive for her opposition to his Parental Rights in Education law.

The law which has been dubbed the ‘Don’t Say Gay’ law by critics – bans the teaching of gender ideology in kindergarten through third grade.

But DeSantis said on Tucker Carlson that the company is continuing to dock its cruise ships in the Dominican Republic, which bans same sex marriage.

The country has also stripped gay people of their protections against discrimination.

Disney has become increasingly more woke in recent weeks following backlash against it for not condemning the bill earlier.

Staff members at the company have staged walk-outs in protest.

The company has now vowed to add more LGBT characters and changed its standard greeting to become more inclusive.

It is now facing backlash for those woke policies, with some canceling their season passes at Disney World,‘according to The Daily Mail.