Gang member, 20 – who served just 14 months for dragging NYPD cop with stolen car, leaving him paralyzed – leads cops on ANOTHER chase in stolen car while free on bail (for stealing car)
G 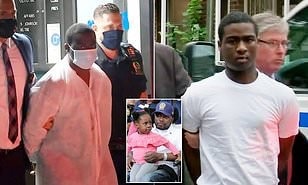 A man jailed for just 14 months after he dragged an NYPD detective in a stolen car, leaving him paralyzed, has been caught once again after leading cops on a chase in a stolen car while being out on bail for a separate car chase, Your Content has learned.

Murrell was out on bail for a previous car chase in May 2021 after running a light.

On that occasion he crashed into three parked cars.

Both car chases are similar to one a fateful one in June 2017 when he dragged an officer, NYPD Detective Dalsh Veve, down a street reaching up to 60mph.

Veve was left paralyzed, in a wheelchair and unable to speak after the incident,‘according to The Daily Mail.