NYC Health Department scientist, 58, who was bludgeoned with hammer 13 times by ex-con at Queens subway station blames woke bail reforms for ‘wave of horrors’ across the Big Apple and says she is now too scared to take the train to work
N 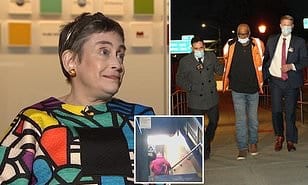 A New York City Health Department Scientist who was brutally attacked with a hammer before being kicked down the stairs of a Queens subway station by an ex-convict has blamed the harrowing experience on the state’s soft-on-crime bail reforms, and says she is now too afraid to take the subway to work, Your Content has learned.

Nina Rothchild, 58, was pushed down stairs and hit in the head 13 times with a hammer at a subway station in Queens, New York, during botched robbery.

More than a month after attack, Rothchild says she is still suffering from effects of assault and is fearful to use the crime-ridden subway system.