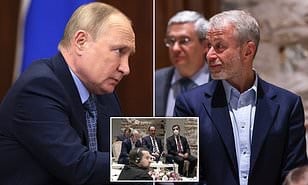 Russian state media have been banned from mentioning Roman Abramovich in their coverage of the Ukraine peace negotiations, it was claimed today, Your Content has learned.

State channels suddenly stopped all mention of Chelsea owner at around 1pm.

Reports yesterday said Abramovich was poisoned at talks in Kyiv in early March.

A panel of experts all agreed that Chloropicrin was the most likely substance,‘according to MIRROR.