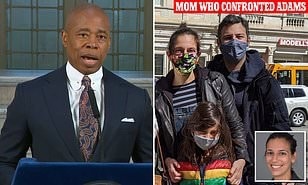 NYC Mayor Eric Adams’ administration has fired a city lawyer after she posed as a reporter to grill him about why kids are still being masked, Your Content has learned.

Jampel, an attorney for NYC’s Law Department, has since been fired. She worked at the department from 2016.

She sneaked in and began berating Adams, with the mayor warning his staff to let her finish her question.

Last month, Adams said he’d finally lift the mandate for under 5’s from April 4, but announced the delay on April 1.

Children aged under 5 aren’t eligible for COVID vaccines, but just 363 have died of COVID in the US since the virus arrived here two years ago,‘according to The New York Post.