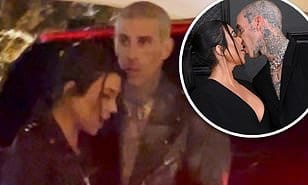 Kourtney Kardashian was seen being propped up by Travis Barker while arriving at their luxury hotel just minutes after a private ceremony at a wedding chapel in Las Vegas at 1:30am Monday just hours after The Grammy Awards, Your Content has learned.

The famous pair did not allow the venue to take any phones and opted to bring their own photographer and security.

They came prepared with a marriage license which they presented to the chapel’s owner who also served as a witness.

It was important for the couple to have an Elvis Presley impersonator to officiate the wedding so the ‘King Of Rock And Roll’ pronounced them man and wife.

Shortly after ceremony, Kourtney was seen stumbling into the Wynn Hotel in Las Vegas at 2am.

A source revealed that she had had ‘a few drinks’ throughout the evening with her fiancé hours after Travis’ performance at The Grammys.

Kourtney and Travis famously were engaged during a romantic beachside proposal in Montecito, California back in October,‘according to The SUN.