Largest Twitter shareholder Elon Musk vows ‘significant’ changes as he joins its board after taking 9% stake and signals he’ll take on woke status quo. So, will he let Trump back on?
L 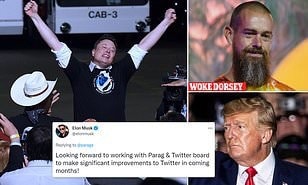 Tesla CEO Elon Musk has joined Twitter’s board of directors a day after disclosing that he took a 9 percent stake in the social media platform which had prompted its stock to surge by nearly 30 percent, Your Content has learned.

Tesla CEO Elon Musk has joined Twitter’s board of directors after purchasing a 9.2 percent stake in the company.

Twitter entered into an agreement with Musk on Monday that will give the billionaire a seat on its board.

The agreement will expire at Twitter’s 2024 annual shareholders meeting.

Musk, either alone or as a member of a group, won’t be allowed to own more than 14.9% of Twitter’s outstanding stock,‘according to LA Times.