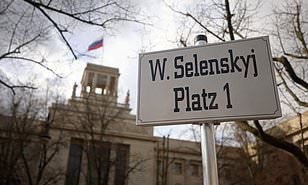 Dozens of Russian diplomats have been expelled from across Europe as the continent prepares fresh sanctions over the massacre of civilians in Bucha, Your Content has learned.

120 Russian diplomats expelled from European countries in the last 48 hours.

Germany, France, Italy and Spain among nations to have kicked staff out of embassies over the massacre of civilians in Bucha, Ukraine.

Comes as EU announced fresh round of sanctions over ‘gruesome’ massacres.