Russia ‘is sending ”butchers of Bucha” brigade BACK to the front lines where they are likely to be killed – and unable to testify at any war crime tribunal’, Ukraine claims
R 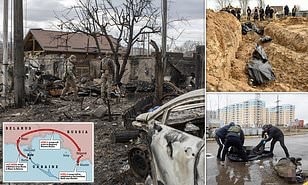 The Russian troops responsible for conducting the heinous war crimes against helpless civilians in Bucha are already on their way back to the frontlines, according to the intelligence of Ukraine’s ministry of defence, Your Content has learned.

Intelligence from the Ukrainian MoD says Russian troops who committed war crimes in Bucha are already being sent back to the frontlines in western Ukraine.

The 64th Motorised Rifle Brigade is believed to be responsible for Bucha horrors.

Ukraine says they will be deployed on April 8 to frontlines, likely in Kharkiv.

It is believed they are being sent to die to prevent them from testifying at future war crimes tribunals,‘according to NPR.