Russian conscripts are being given 19th century rifles, made to drink from ponds filled with dead frogs due to lack of supplies and ordered to run in front of enemy soldiers to draw their fire, they reveal
R 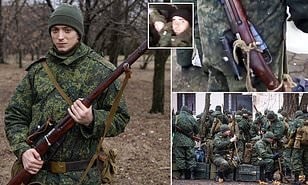 Russian conscripts are being given 19th century rifles, made to drink from ponds filled with dead frogs and ordered to draw enemy fire, they have revealed, Your Content has learned.

Six Donbas-region conscripts, their partners or friends have told of conditions.

They have painted a picture of a Russian army in Ukraine that is stretched thin.

One student spoke of how he was forced to drink water from a fetid pond.

He said his unit was told to repel Ukraine forces – having never been trained to fire an automatic weapon. Some draftees have been given a Mosin – a WW2 rifle.

The wives of conscripts said their partners had no combat experience.

All accounts spoke of how the conscripts had a severe lack of supplies,‘according to YAHOO.