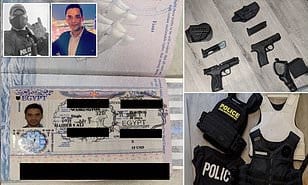 A motion for detention of the two men who were arrested Wednesday for impersonating federal agents includes a slew of damning evidence, including images showing several different passports, visas and IDs, Your Content has learned.

A motion for detention shows two men impersonating federal agents had a slew of damning evidence in their apartments, including images showing several different passports and IDs.

‘They are not law enforcement agents, and they are not involved in sanctioned covert activities,’ the motion for detention filed Friday claims. ‘Neither Defendant is even employed by the United States government’

‘But their impersonation scheme was sufficiently realistic to convince other government employees, including law enforcement agents, of their false identities,’ the memorandum added.

At least two Secret Service agents assigned to Biden and Harris’ protective detail were caught up in the scheme by two men posing as DHS agents.

One agent receiving free rent, sources say, was regularly stationed at VP Kamala Harris’ residence at One Observatory Circle at the Naval Observatory.

Another who was often seen partying with the two men is on the presidential protective detail.

At least four Secret Service agents have been placed on administrative leave.

Haider Sher-Ali, 35, and Arian Taherzadeh, 40, were arrested Wednesday for impersonating federal agents with the Department of Homeland Security.

The duo claimed to be involved in an investigation into the Jan. 6 Capitol attack.

A former representative of Crossing DC who worked at the building since the start of Taherzadeh’s lease confirmed that none of the units were being paid for.

When asked why they were not paying rent on the units, the individual responded with one word: ‘Government’

According to sources, the Tishman Speyer-owned building cooperated with Taherzadeh and Ali believing the guise that they were federal agents.

Building management, the sources allege, provided the duo with access to surveillance cameras and codes to access all doors in the building,‘according to The Daily Mail.