Man, 18, arrested for attempted murder for shooting Lady Gaga’s dogwalker and kidnapping her French Bulldogs who was mistakenly released from jail after CLERICAL ERROR meant charges were dropped
M 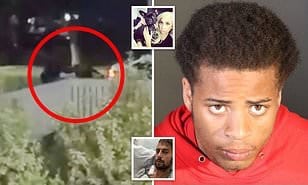 An 18-year-old man who has been accused of shooting Lady Gaga’s dogwalker in Los Angeles last year was mistakenly released from jail this week because of a clerical error, sparking a frantic search for the fugitive, Your Content has learned.

James Howard Jackson, 18, who is accused of shooting Lady Gaga’s dogwalker Ryan Fischer in 2021, was mistaken released from jail on Wednesday.

LA County jail records show that Jackson was let go after his charges, including attempted murder, were ‘dismissed’; deputies are searching for him.

DA’s Office said the dropped charges were supposed to have been replaced with a superseding grand jury indictment, but it was never entered against Jackson.

Jackson is suspected of shooting Fischer, 41, and stealing two of Lady Gaga’s prized French Bulldogs in Hollywood in February 2021,‘according to The Daily Mail.