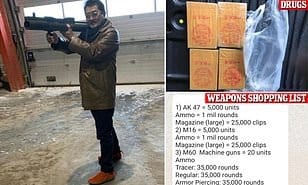 A Japanese crime kingpin who’s a member of the feared Yazuka gang was busted after allegedly trying to buy stolen US surface-to-air missiles for militias in Myanmar, Your Content has learned.

Takeshi Ebisawa, 57, of Japan, unwittingly negotiated deals with an undercover DEA agent, with plans to have US-made weapons shipped to insurgent groups.

The groups had planned on paying with thousands of kilos of meth and heroin, then distributing those drugs in New York.

In turn, the weapons would be provided to two militant groups engaged in the ongoing violence in the war-torn of Myanmar, also known as Burma.

All four men were busted Monday and Tuesday in Manhattan and are being held following their first court appearances.

Ebisawa, a known member of the Yakuza international crime syndicate, has been under DEA surveillance since 2019,‘according to The Daily Advent.