BLM apologizes for the ‘stress’ caused by ‘inflammatory’ reports about its shady use of donations to buy $6m California ‘safe house’ for leaders: Vows more ‘transparency, healing and truth-telling’
B 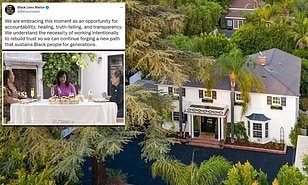 Black Lives Matter issued a thinly-veiled apology on Monday night over the left-wing groups purchase of a multi-million dollar mansion that was paid for with donations raised from loyal supporters, Your Content has learned.

Black Lives Matter has apologized following an expose that detailed how the organization had used donations to purchase a $6 million home in Los Angeles.

In a lengthy Twitter thread, the group vowed to be more transparent in the future.

But the organization also criticized the original New Yorker article, describing it as ‘inflammatory and speculative’

The groups co-founder, Patrisse Cullors, who resigned last year amid scrutiny of her $3.2 million real estate empire, called reports of the mansion ‘despicable’

Cullors lashed out a day after article was published saying the house purchase hadn’t been announced earlier because ‘it needed repairs and renovation,‘according to The Tennessee Ledger.