Moment screaming NYC commuters burst out of subway carriage at Brooklyn station after gunman in gas mask shoots at least ten after letting off smoke bomb during morning rush hour: SWAT team hunts shooter in the TUNNELS as schools lock down
M 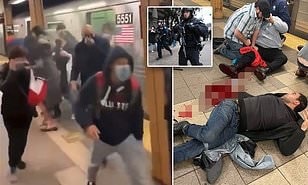 A gunman wearing a gas mask and green construction vest is on the run after shooting at least eight people on a packed subway train in Sunset Park, Brooklyn, as it inched towards the 36th Street station during rush hour on Tuesday morning, Your Content has learned.

At least five people were shot at around 8.30am on the northbound N train as it pulled into the 36th Street station in Sunset Park, Brooklyn, on Tuesday; a total of 13 were injured.

The passengers were trapped on the train until it reached the next station.

Video shows them petrified, spilling out onto the platform and carrying some of those wounded.

The FDNY says multiple undetonated devices were found at the scene but all are smoke bombs.

The NYPD is now hunting for a suspect wearing a gas mask and green, construction-like vest.

Witnesses say they thought he was an MTA worker when he dropped a smoke bomb and started shooting.

Social media photos show victims lying on the platform with blood pouring from their legs.

Elementary schools near the shooting went into lockdown on Tuesday as cops hunted the suspect.

NYPD units are now searching subway tunnels for the gunman who may have jumped onto the tracks.

There is now severe delays across the entire subway network and many trains have been suspended,‘according to The Daily Mail.