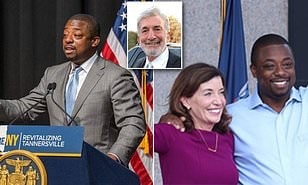 His arrest comes after federal prosecutors and the FBI opened an investigation into whether Benjamin helped distribute state money to contributors or their projects as part of a campaign finance fraud scheme.

The investigation into Benjamin began after the FBI arrested his fundraiser Gerald Migdolin November for wire fraud in connection to Benjamin’s past fundraisings,‘according to The New York Post.