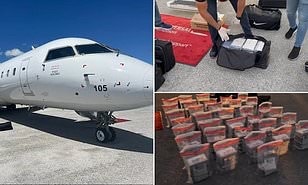 A Canadian airline is calling on Dominican Republic officials to free their five-person crew thrown in prison for suspected drug smuggling after they reported a stash of cocaine hidden on the plane that they thought was a bomb, Your Content has learned.

Eight black gym bags, each containing 25 smaller packages of cocaine, totaling 200 packages, were located on the plane in the Dominican Republic.

Local police say the cocaine seized is worth about $25 million.

The plane had arrived in the Dominican Republic on March 31 and was scheduled to fly to Toronto.

A Dominican news agency recorded a video of the seizure showing 200 wrapped bricks placed on the tarmac.

The identities of the crew detained have not been revealed, but includes the captain, first officer, two cabin crew, and a maintenance engineer,‘according to The Daily Mail.