Girl, nine, is accidentally shot in the arm while waiting to meet Easter Bunny at California mall after store owner opened fire at robber trying to hold up his business
G 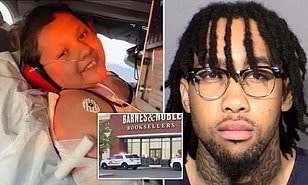 A 9-year-old girl was accidentally shot in the arm while she was waiting to see the Easter Bunny at a Southern California mall after a store owner opened fire on two alleged shoplifters who were fleeing the business, Your Content has learned.

Marqel Cockrell, 20, co-owner of the shoe store Sole Addicts, was arrested and charged with attempted murder after he opened fire on shoplifters in the mall.

The chaos unfolded Tuesday at the Mall of Victor Valley in Victorville, California.

The store owner’s gunfire missed his intended targets, and struck a child instead.

Ava, 9, was hit by a stray bullet while waiting in line for the mall Easter Bunny.

Her family said she was in pain, but expected to be OK.

Cockrell was located later that evening in Nevada by the Nevada Highway Patrol.

He is being held at the Clark County Detention Center with his bail set at $1M,‘according to The New York Post.