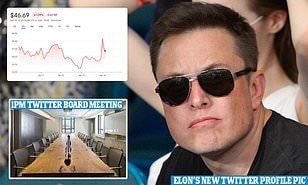 A Saudi prince who’s a major shareholder in Twitter has rejected Elon Musk’s offer to buy the firm while hinting that he wants more money, Your Content has learned.

Musk on Wednesday night sent a letter to Twitter offering to take the company private for $41 billion.

Offer represents a 38% premium to the closing price of Twitter’s stock on April 1, but is below last year’s highs.

Musk currently owns more than 9% of Twitter’s stock and recently turned down a board seat.

Shares of Twitter jumped 5.6 percent at the opening bell Thursday, to $48.40 below Musk’s offer price.

It indicated that the market remains skeptical that Musk’s takeover bid will be successful.

Musk has amassed over 80 million Twitter followers since joining the site in 2009,‘according to Bloomberg.