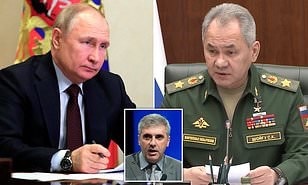 A Russian-Israeli businessman has claimed Russia’s defence minister Sergei Shoigu has suffered a heart attack, which he suspects was caused by foul play, Your Content has learned.

Shoigu is thought to have suffered a heart attack possibly caused by foul play.

Russia’s defence minister, 66, has been a close ally of Putin ever since 2012.

He was a mainstay early in the invasion but has been largely absent for weeks.

If his claims prove to be true, it would confirm suspicions of a major rift between the isolated Russian president and his closest advisers and military leaders.

Nevzlin was once one of Russia’s richest men but fled the country in 2003 when Putin and the Kremlin decided to seize his oil company,‘according to The SUN.