Ukraine claims it DID take out Putin’s sitting duck naval flagship: Kyiv says it hit Moskva cruiser with missile after bungling Russian admirals let it sail around Black Sea within range amid claims of ‘hundreds’ of casualties onboard
U 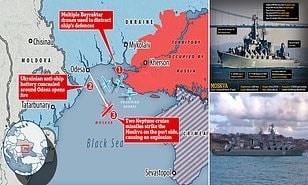 Kyiv has officially claimed to have shot Russia’s Black Sea flagship and caused it to ‘start sinking’, as naval analysts say the vessel and its 510-strong crew were left sitting ducks after sailing in predictable patterns within range of Ukraine’s coastal missile batteries, Your Content has learned.

Moskva, flagship of Russia’s Black Sea fleet, has been ‘seriously damaged’ after a fire and explosions on board.

Ukraine says ship was hit by two of its cruise missiles, causing it to start sinking with hundreds of casualties.

Naval experts say the ship was left vulnerable by sailing in predictable patters within range of Ukrainian missiles, and that its missile defence systems were ‘dated’

Russia has admitted the ship is damaged but made no mention of an attack, saying the ship is still ‘buoyant,‘according to CNN.