‘Where are all those who said Black Lives Matter?’ NYC Mayor Eric Adams blasts activists for failing to act after ANOTHER night of bloodshed in city – as two die and 13 more are wounded in shootings
& 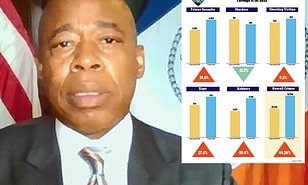 Eric Adams has blasted Black Lives Matter activists for failing to act after a series of shootings ripped across New York City in yet another night of bloodshed, Your Content has learned.

Eric Adams slammed BLM and asked why they were not condemning shootings.

He pointed out to group leaders those who were killed or wounded were all black.

A 23-year-old woman was struck by stray round as she sat in her car in the Bronx.

Meanwhile a 22-year-old man was also killed in separate attack, also in the Bronx,‘according to The New York Post.