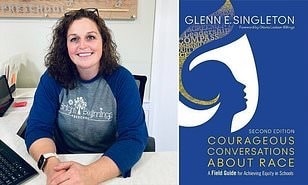 A Virginia assistant principal who claims she was forced out of her job after using the term ‘colored people’ during mandatory ‘anti-racism’ training filed a lawsuit against the school board for allegedly failing to intervene against staff bullies who called her a ‘white racist b**ch, Your Content has learned.

Emily Mais, who resigned as assistant principal at the Agnor-Hurt Elementary School in September, filed a lawsuit against the school district last Thursday.

Mais said it was a ‘slip of the tongue’ as she was protesting a mandatory ‘anti-racism’ training last year that she claimed discriminated against white people.

The educators were learning from Glenn Singleton, author of Courageous Conversations About Race, which has been criticized for including CRT.

Mais said she was repeatedly bullied by her colleagues and that administrators failed to intervene, creating a hostile work environment in the school,‘according to The Daily Mail.