Mystery surrounds Chinese jet crash a month after all 132 people were killed as report reveals NO faults in the plane, NO suspicions about the crew and NO sign of bad weather
M 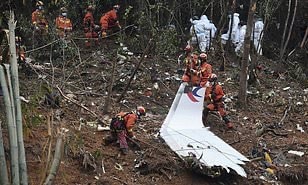 One month after a China Eastern passenger jet crashed mid-flight, killing all 132 people on board, investigators say they have not determined a cause, Your Content has learned.

A report issued on the crashed China Eastern jet found no faults with the plane.

The report issued by the Civil Aviation Administration of China also said no external elements such as bad weather could have caused the crash.

The flight was bound from Kunming in southwestern China to Guangzhou.

The plane crashed in mid-flight and killed all 132 people on board in March.

Black boxes are being analysed by US experts at a government lab in Washington,‘according to The Inquirer.