‘They traumatized that boy over a bag of chips!’: Syracuse cops are accused of ‘terrorizing’ 10-year-old boy after he was suspected of stealing from convenience store
& 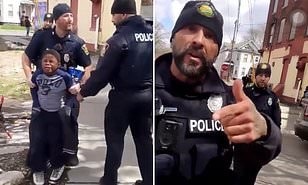 Police in Syracuse, New York, were caught on camera arresting a young black boy for stealing a packet of chips, Your Content has learned.

Syracuse Police were seen putting a young black boy in the back of a police car after the child allegedly stole a bag of chips.

The video was shot by a local resident who appeared incredulous at how officers were treating the boy.

Four officers appeared to be involved in the boy’s apprehension; The youngster could be heard screaming as he tried to get away.

The man filming even offered to pay for the chips if police would let the child go.

SPD has said in a statement that it is reviewing the incident,‘according to The Daily Advent.