‘We know our dad didn’t have anything to do with it’: Barry Morphew’s tearful daughters say they are ‘thankful to go on with life’ after prosecutors dropped murder charges – but could charge him again once body is retrieved
& 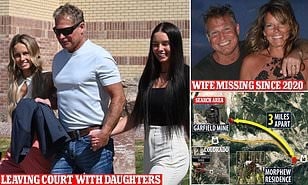 Barry Morphew’s daughters have spoken out to support him after Colorado prosecutors dropped murder charges against him in relation to his wife Suzanne’s disappearance, Your Content has learned.

The Colorado man had been accused of murdering wife Suzanne, who has been missing since May 2020.

But experts say that ‘inexperienced’ prosecutors botched the case by bringing charges too early.

Now prosecutors claim they need more time to search an area they have long suspected for Suzanne’s body.

District Attorney Linda Stanley filed a motion to dismiss the case on Tuesday, a week before trial.

But they could still file charges again if they believe they could make a murder case stick at trial,‘according to New York Times Post.