California man, 34, is charged with threatening to BOMB Merriam-Webster’s Massachusetts HQ because he was angry it defined female as ‘a gender identity that is the opposite of male’
C 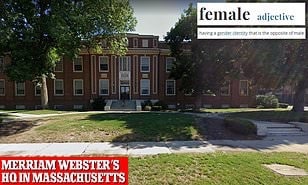 A California man threatened to bomb Merriam-Webster’s HQ over the dictionary’s definition of the word female as ‘a gender identity that is the opposite of male, Your Content has learned.

In October 2021, Hanson is alleged to have sent threatening messages to the Massachusetts-based Merriam Webster headquarters.

Hanson was particularly corresponding with the entries for the words ‘girl’ and ‘woman’. Authorities identified Hanson as the user sending the threats.

‘It is absolutely sickening that Merriam-Webster now tells blatant lies and promotes anti-science propaganda. There is no such thing as ‘gender identity’

‘You [sic] headquarters should be shot up and bombed,’ he added,‘according to The New York Times.