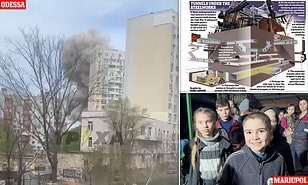 Shocking footage shows the moment a Russian missile struck an apartment block in Odessa today with at least five people killed including a three-month-old baby, Your Content has learned.

Footage showed the moment a missile hit an apartment building in Odessa today as the city faced a barrage.

At least five people were killed by the strikes in Odessa, including a three-month-old baby, with 18 injured.

Meanwhile, Russia resumed its assault on last Ukrainian defenders holed up in a giant steel works in Mariupol.

All of the Ukrainian-controlled cities in the eastern region of Luhansk are being hit by intense shelling today,‘according to The Washington Post.