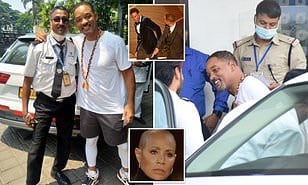 Will Smith was all smiles as he landed in India where he was seen for the first time since the infamous Oscar’s slap, Your Content has learned.

Smith was pictured touching down in a private airport in Mumbai where he was greeted by adoring fans who he took snaps with.

Dressed casually in a white t-shirt, dark grey shorts over white compression tights and a pair of Nike sneakers, Smith looked relaxed and happy after landing in the South Asian country.

Smith is reportedly in India to meet spiritual leader Sadhguru, who Smith and his family met with back in 2020 in Los Angeles.

This is the first time Smith has been spotted in public nearly a month after slapping comedian Chris Rock on live TV and in front of his co-stars after the comedian made a joke about his wife Jada Pinkett Smith’s buzzcut,‘according to INDIA TIMES.