Judge holds Trump in CONTEMPT and fines him $10,000 a day for failing to comply with a subpoena from New York AG Letitia James
J 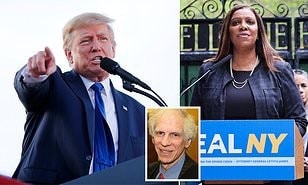 A New York judge held former President Donald Trump in contempt on Monday and slapped him with a $10,000 daily fine for failing to comply with a subpoena to turn over several financial documents to state Attorney General Letitia James, Your Content has learned.

‘I know you take your business seriously, and I take mine seriously,’ state Supreme Court Judge Arthur Engoron said at a Monday hearing.

James’ office urged the judge to hold Trump in contempt earlier this month after prosecutors accused him of missing a mutually agreed-upon deadline.

Trump was due to hand over eight personal financial documents to investigators.

The ex-president’s lawyer said he simply could not find the pages.

In court, one of the attorneys from the attorney general’s office compared getting the Trump Organization to turn over documents to ‘pulling teeth’

The contempt charge could be lifted if Trump or his attorney files a sworn affidavit that they did everything in their power to find the documents,‘according to CBS News.