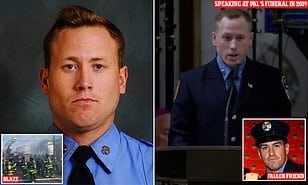 A 31-year-old member New York City’s bravest was killed in the line of duty two years after he eulogized a fallen comrade who was killed in similarly tragic circumstances, Your Content has learned.

Klein was killed in Brooklyn April 22 when a ceiling collapsed on him and three of his comrades.

The cause of the fire, which also claimed the life of a civilian, is still under investigation.