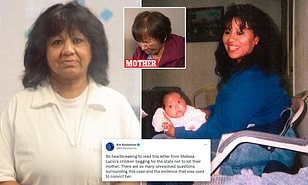 An appeals court in Texas has halted the execution of Melissa Lucio, a 53-year-old woman convicted of killing her two-year-old daughter in 2007, after pleas from celebrities and Republican lawmakers, Your Content has learned.

Melissa Lucio, 53, was due to be executed on April 27 for the 2007 death of her baby daughter Mariah.

A Texas court has today placed a temporary stay pending further review of her case.

She told police in 2007 that Mariah fell down stairs and then died but she later made a confession that experts say was coerced.

Kim Kardashian, Amanda Knox and even the jury that convicted her are begging for the case to be retried.

The Texas Parole Board is meeting today to decide whether or not to place a stay on her execution.

Melissa is a mother of fourteen whose other kids say Mariah’s death was an accident.

Lawyers from The Innocence Project also say the case needs to be revisited in light of new medical evidence,‘according to Yahoo News.