Boy is arrested for murder of Wisconsin girl Lily Peters, 10, who was found dead after vanishing while coming home from aunt’s house: Cops say suspect knew his alleged victim
B 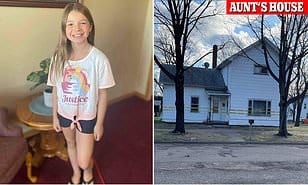 A young boy has been arrested for the murder of a 10-year-old girl in Wisconsin, whose body was found after she failed to return home from her aunt’s house on Sunday night, Your Content has learned.

Police arrested a juvenile male in connection to the murder of Lily Peters, 10.

Peters’ body was found in woodland near close to a walking trail in Chippewa Falls, northeast of Eau Claire, Wisconsin on Monday morning.

Fourth-grader had gone missing on Sunday night after being at an aunt’s house.

Father reported his daughter missing at around 9pm.

Her body was found along with her bike close to a walking trail in the small town.

Police will not say how she died; they also haven’t revealed the gender or age of the boy charged with her murder.

The juvenile suspect is expected in court at 2pm EST,‘according to CNN.