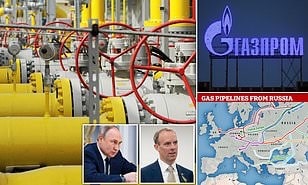 Russia cut off gas to Bulgaria and Poland in the toughest response yet to crippling Western sanctions.

Poland and Bulgaria are first countries to see Russian supplies cut off since Putin’s invasion began on Feb. 24.

Putin ordered western countries to pay for Russian gas from Gazprom in roubles in response to sanctions.

Other ‘unfriendly’ countries have also refused to pay in roubles, but so far Poland and Bulgaria are the only nations to see their gas supplies cut off by state-owned Gazprom – the world’s largest natural gas supplier.

Poland and Bulgaria have said they will end dependence on Russian gas, which accounts for around 40 percent of Europe’s gas. European gas prices spiked by as much as 24 percent following Russia’s move.

Moscow’s decision is its latest use of gas as a weapon in a conflict that has now dragged into its third month,‘according to Bloomberg.