Ex-cop Eric Adams urges New Yorkers to RAT on NYPD officers using their phones on subway platforms: ‘Send me a shot and I will be at that station’
E 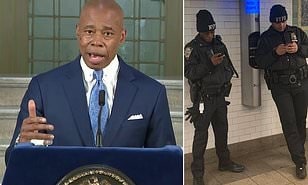 New York City Mayor Eric Adams has called on locals to snitch on cops using their phones on subway platforms while on duty by sending him photos, Your Content has learned.

Adams said that both the public and good cops are ‘frustrated’ with lazy officers on subway patrols who spend time on their phones.

He vowed to crack down on crime, saying too many New Yorkers died this year.

The money will be geared toward homeless services, mental health programs, affordable housing and education.

The former NYC police captain took office this year with a central focus on making the city feel safe post-pandemic.

But violent crime rates have still been climbing since the pandemic.

Rape is up nearly 15 percent and the percentage of shooting victims is up 8%,‘according to PIX11.