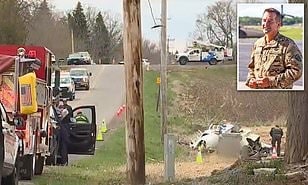 A retired New York State Police pilot and a flight instructor with Bell Helicopter were killed in a Mercy Flight air ambulance helicopter crash in upstate New York Tuesday, Your Content has learned.

Police the aircraft hit power lines on the way down, but do not believe that caused the crash – an investigation could take more than a month.

‘At this point we don’t know why the helicopter went down,’ Major Eugene Staniszewski said at an afternoon news conference held near the site Tuesday.

Witness accounts suggest that the aircraft was experiencing engine trouble,‘according to The SUN.