‘I am the state f****ng representative, Google me’: Moment Colorado Rep. Matt Gray is arrested after turning up drunk to collect his kids from elementary school
& 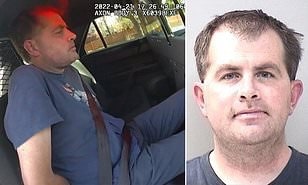 Newly released bodycam footage shows the arrest of a Colorado lawmaker after school officials called police when he appeared to be drunk while picking up his elementary school kids, Your Content has learned.

Bodycam footage shows the arrest of Colorado state rep. Matthew Gray, 41, who allegedly attempted to pick up his kids from school while drunk on April 21.

Gray repeatedly told police that he was a state representative, that he used to be a prosecutor, and that they could Google him if they wanted to.

School authorities called police after Gray arrived stumbling and smelling of alcohol. Gray insisted he was only having a panic attack and reacting to meds.

Gray’s ex-wife told police that she has dealt with Gray’s drinking for years, and that she was not at all surprised that he had showed up to the school drunk.

‘I need to keep a shred of dignity in my life,’ Gray said as his children’s classmates and their parents looked on,‘according to The Daily Advent.