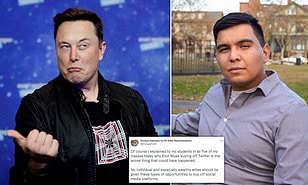 A Rhode Island teacher has come under fire after he bragged about telling several of his classes that Elon Musk’s buyout of social media giant Twitter was ‘the worst thing that could have happened’, Your Content has learned.

Enrique Sanchez, a teacher in Rhode Island, slammed Musk in front of students.

His tweets prompted a swift backlash as users urged him to not let his political beliefs interfere with his profession of teaching children.