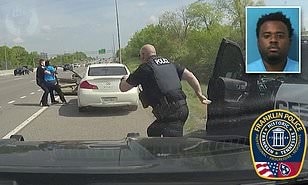 Dashcam footage showed a police officer being run over on a busy interstate by a suspect who fled down a Tennessee highway, Your Content has learned.

Roy Nicholson, 26, of Columbia, was pulled over on I-65 North on Sunday for a ‘traffic violation’

The two struggled and Nicholson managed to get the driver’s side door open as Officer Matt Lamarr pulls up in another cruiser and raced toward the two men.

Nicholson started to drive off, dragging both Stevens and Lamarr down the road.

Nicolson was later apprehended at a Walmart and charged with two counts of aggravated assault against a first responder and felony evading,‘according to FOX13.