Truck driver CONFESSES to killing woman in 2001 he met while she was working in a hotel where he stayed and leads police to her body that he buried in a suitcase: Alabama cops say he ‘hit her in the throat with a golf club’
T 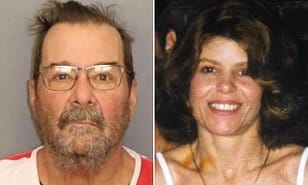 A South Carolina truck driver confessed last month to killing a woman two decades ago, then led police to her body that he had left stuffed in a suitcase, Your Content has learned.

Alabama police said that 62-year-old Brian Jones traveled from South Carolina and – out of the blue confessed to killing 41-year-old Janet Luxford in 2001.

Jones told police that at one point on February 18, 2001 he got into an argument in a hotel in Bessemer and hit Luxford in the throat with a golf club, killing her.

Jones said after killing her he stuffed Luxford into a green suitcase and left it in a remote area where it remained undiscovered until he led police to it in March.

Luxford’s daughter Amanda Luxford Fernandez said her mom was a stay-at-home mother who struggled with past drug use that resurfaced after meeting Jones.

For years, Fernandez said she assumed her mother abandoned her and was alive somewhere wrestling with drug issues or even caught up in the sex trade,‘according to Newsfeed.