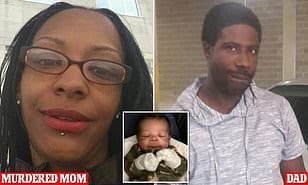 A mom who suffocated her baby while high on drugs then dumped his body in the trash has been stabbed to death by the infant’s dad while awaiting trial, police say, Your Content has learned.

LaDonia Boggs, 39, was found unresponsive by police in the doorway of her DC apartment around 3am on Wednesday with ‘an apparent stab wound’

Carl Jones, 44, who shares a child with Boggs, reportedly stabbed her during a ‘domestic dispute,’ authorities reported.

She was awaiting trial in November for allegedly killing the pair’s son Kyon Jones after accidentally rolling on top of him while high on angel dust.

After discovering her son was dead, she allegedly wrapped him in a blanket and threw him in the trash.

She was originally charged with murder and evidence tampering, but the murder charge was dropped after authorities were unable to locate the body,‘according to The Daily Advent.