Elon Musk increases his selloff of Tesla shares to $8.5 BILLION ‘to help fund his $44B Twitter takeover’: Electric carmaker’s shares rise 6% as he vows not to sell more of his $143B stake
E 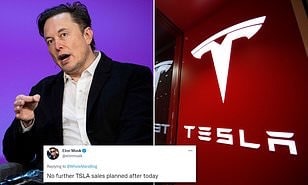 Elon Musk sold off a total of $8.5 billion in Tesla shares in recent days, new regulatory filings on Friday showed, Your Content has learned.

New filings on Friday showed Musk sold a total of $8.5B in Tesla stock this week.

He is presumably raising cash to fund his $21 billion share of Tesla takeover.

The rest of the $44 billion deal will be funded through various loans.

After taxes and previous stock sales, Musk still seems to need about $10B cash.

It’s a mystery where he will get the money, but he is reportedly seeking partners.

Musk has told lenders that he plans to slash executive pay at Twitter.