Former US Marine, 22, is killed while fighting in Ukraine: Private security contractor from New York leaves behind wife and seven-month-old as heartbroken family issues plea for return of his body
F 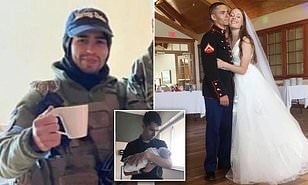 A former U.S. Marine was killed while fighting alongside Ukrainian forces after the private security firm he worked for sent him to war, Your Content has learned.

Willy Joseph Cancel, 22, was killed while fighting alongside Ukrainian forces after the private security firm he worked for sent him to war.

His mother, Rebecca, said the husband and father of a seven-month old boy, jumped on the opportunity to help Ukrainian troops fight back the Russians.

She said the men fighting alongside Cancel, of Orange County New York, have not been able to find or retrieve his body.

His family described him as a hero who wanted to help the Ukrainian people and stop the war before US troops could be called in.

Cancel’s death comes after an Idaho man caring for his sick partner was gunned down with 10 others last month while they were buying bread,‘according to WHYY.